Affiliate Disclosure: By buying the products we recommend, you help keep the site alive. Read more.

Old PCs can’t cope with the demands of modern operating systems and software. While upgrading hardware such as memory can help, the better solution is a lightweight operating system.

Many Linux distros are designed to be lightweight, with versions of Linux under 500MB and even under 100MB available.

If you’re looking for a lightweight operating system for your PC, try these compact, resource-light Linux distros.

Most PCs currently ship with 4G of RAM or higher. If you need an operating system for an older machine, these Linux distros run on computers with less than 1GB.

Xubuntu is an Ubuntu derivative which uses the Xfce desktop environment. While Xubuntu may not boast the eye candy of GNOME, it does offer a snappy experience. To try Xubuntu, you only need 512MB of memory. With the Minimal CD, just 128MB is needed, making this the first Linux distro under 1GB to consider.

Meanwhile, a full install requires at least 1GB of memory.

As a branch of Ubuntu, Xubuntu therefore has access to the entirety of the Canonical repositories. It’s a fantastic distro that offers great features and applications with low system resource consumption.

Lubuntu aptly describes itself as “lightweight, fast, easier.” As the name suggests, Lubuntu is an Ubuntu derivative and like Xubuntu it allows access to the full Canonical repositories. Whereas Xubuntu utilizes the Xfce desktop, Lubuntu opts for the LXDE/LXQT desktop.

The minimum specs for a CPU running Lubuntu is a Pentium M or 4, or AMD K8. That means support for many older computers. Additionally, Lubuntu comes packed with loads of apps including the LXTask system monitor, GNOME disk utility, MTPaint and much more.

Linux Lite is unsurprisingly a light Linux distro. Based on Ubuntu LTS and described as “simple, fast, and free,” Linux Lite has low memory requirements. Bundled apps include LibreOffice and VLC; Linux Lite may be light on system resources but it’s heavy on included features.

The minimum system spec for Linux Lite is a PC with a 1GHz CPU, 768MB of RAM, and 8GB of storage. Better performance can be enjoyed with a 1.5GHz CPU, 1GB of RAM and 20GB of space.

With its balance of function and efficiency, Linux Lite is a slimline distro that’s usable out of the box.

You can install Zorin OS Lite on a system running a modest 700MHz single core processor, 32-bit, or 64-bit. The computer will need 512MB of RAM and 8GB of storage too. Zorin OS Lite can be run satisfactorily on a display with just 640×480 pixel resolution.

If you’re looking for something that performs well and has a Windows-like feel for your old PC, Zorin OS Lite is ideal.

Arch Linux abides by the KISS mantra: keep it simple, stupid. Available in i686 and x86-64 varieties, Arch Linux is lightweight and easy to use. You’ll need a PC with at least 512MB of RAM, with 800MB of disk space. A Pentium 4 or later is recommended, although some older CPUs can run Arch Linux.

Notable Arch Linux derivatives include BBQLinux and Arch Linux ARM which can be installed on the Raspberry Pi.

While your PC hardware may be old, Arch Linux operates on a rolling-release system for current, continuous updates.

If you’re running a PC from the 2000s, it like has inadequate RAM installed for a modern OS. Try one of these operating systems for a machine with less than 500MB of RAM.

Released as a community-driven continuation of the famously low-spec CrunchBang Linux distro, Helium is based on Debian 9.

Employing the Openbox window manager and conky system monitor, Helium features an assortment of GTK2.3 themes and conky configurations. This lets you customize how the desktop looks, creating a unique environment.

Helium is available for 32-bit, 64-bit, and ARM architectures. Your PC should have at least 256MB of RAM, and a 10GB hard disk drive. Note that different installation options result in slightly differing disk usage—installation from the live ISO uses 2.1GB, for example. Similarly, adding different applications at installation will result in a different storage footprint.

As with the Debian system requirements, the lowest spec CPU you can use is a Pentium 4 1GHz chip.

Porteus is a Linux distro optimized for use as a live CD, to boot from a flash drive or CD. You can also install Porteus on a hard drive.

With 32-bit and 64-bit options, Porteus is one of the best Linux distros for aging PC hardware. Capable of booting up in just 15 seconds, Porteus takes up just 300MB of storage space.

Porteus can even be loaded into RAM and run purely from the system memory. Because Porteus is Portable and modular, it can be used on a variety of computer types.

The minimum system requirements are 256MB of RAM, 5GB of hard drive space, and a 500MHz processor. Even the recommended specs (512MB RAM, 10GB of drive space, a 1GHz processor) are rather forgiving. 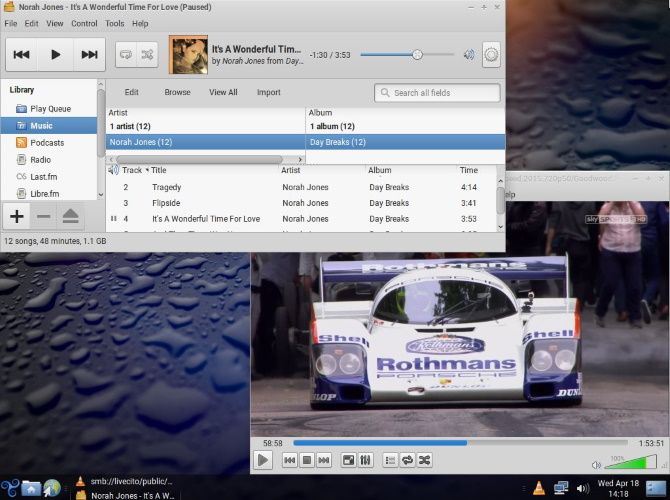 While Trisquel Mini may be small, it’s packed with Linux apps including AbiWord, GNOME MPlayer, and Transmission.

Any PC built since 1999 should run Trisquel Mini. It requires just 128MB of RAM for the 32-bit version (256MB for 64-bit) and 3GB of storage. AMD K6 and Intel Pentium II processor architectures are the earliest supported.

Need to use an old, modest computer, perhaps from the last century? Try one of these amazing Linux distros intended for systems with less than 100MB of RAM.

Looking for a fast, easy to use distro? Puppy Linux


Everything You Ever Wanted To Know About Puppy Linux


Everything You Ever Wanted To Know About Puppy Linux
Here, we'll be taking a look at a distribution of Linux that is famous for being able to run with very little hardware requirements, Puppy Linux. Puppy Linux isn't based on another distribution; it is…
Read More

is a perfect lightweight OS for an old laptop or PC. Boasting a minuscule footprint, Puppy Linux may be booted straight from a flash drive or CD. Further, Puppy Linux can even live in-memory.

Boot up typically takes less than a minute, even on older hardware. The default ISO is about 100MB, and with OpenOffice installed Puppy Linux is still under 300MB (around 256MB).

Puppy Linux is great as a full install, or simply as a live CD to use on guest PCs. There’s even a version of Puppy Linux for the Raspberry Pi, called Raspup.

Another version of Puppy Linux, Macpup boasts a similarly tiny footprint and is even small enough to run in RAM. However, despite its small footprint, Macpup Linux is a full-fledged distro. A nice selection of office, multimedia, and graphics apps transform your old PC hardware into a new computer.

The name “Macpup” derives from the use of a macOS-like dock across the foot of the desktop. Other desktop elements are less Mac-like.

If you’re seeking to rejuvenate that old PC and stay secure, check out the uncompromising SLiTaz. While this Linux distro is lightweight, it is also high performance, suited as much for running from a live CD as from a disk drive.

Install SliTaz on aging PCs, servers, and even tiny ARM devices like the Raspberry Pi. You can even roll your own version.

The root filesystem is a mere 100MB, and the ISO image is less than 40MB. Neat features include an FTP/web server powered by Busybox, Dropbear SSH client, SQLite, and the Openbox desktop running on Xvesa/Xorg. 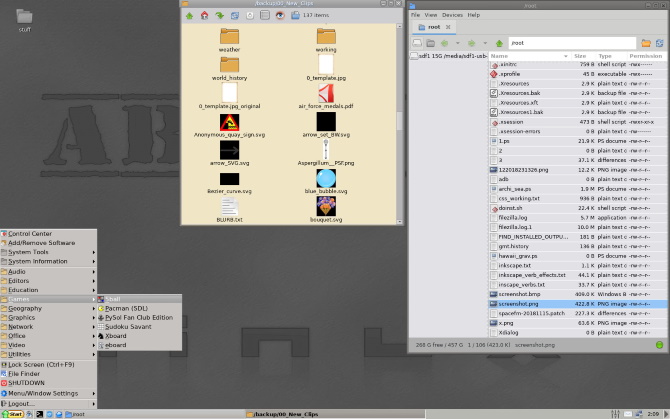 The long-running Slackware distro is the basis for this simplified approach to Linux, capable of running on most hardware. Absolute Linux bundles Kodi, Inkscape, GIMP, and other popular applications into the installer, with a minimalist approach to the desktop.

This distro is “version-compatible” with Slackware, which means software packages for Slackware should run on Absolute Linux.

Like Slackware, Absolute Linux can run on 32-bit and 64-bit systems, with support for Pentium 486 CPUs. 64MB of RAM is supported (1GB recommended) with 5GB of HDD space free for installation.

This makes Absolute Linux ideal for older hardware, although for the best results on ancient PCs, rely on pure Slackware.

The Core Project is a Linux project offering a barebones experience to which you can add your own elements.

TinyCore is just 10MB and can be stored on, installed from, or simply run on, a USB stick, embedded devices, or a CD with very little space left. Additionally, it can run with just 48MB of RAM. From this modest starting point, you can add the software you need to get your old PC up and running.

While smaller versions of Core are available, TinyCore is ideal for desktop and laptop computers.

While these may be the top Linux distros to breathe new life into your old PC, there’s no shortage of alternatives.

To recap, the best lightweight Linux distros for an old PC are:

Whichever distro you decide to install, don’t forget to protect it with solid antivirus software. Here are the best free antivirus programs for Linux

How much does TVAddons.ag makes in $$$$

How much does TVAddons.ag makes in $$$$ For those of you that wanted to know how much TVAddons is making   Kodi  Website Traffic & Revenue Daily Unique Visitors ? : 49,036 Daily Ads Revenue […]

Kodi Kodi Use Protection Since the Linux Establish is only 163 MB, it seems to be all that you will need. Its’ measurement will make it perfect for equally better and reduce-finish products. You will […]

Kodi Here’s the deal, folks — there are far too many Linux distributions out there nowadays. It used to bother me, but over time, I made peace with it. Look, it’s the nature of the […]