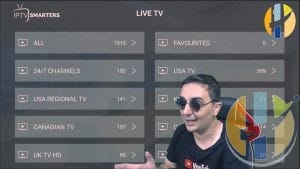 Considered to be one of the best APK to cut the cord. IPTV Smarters Pro is a free APK available for download for free as long as you have an IPTV service Subscription that can support Xtream Codes IPTV Services.

The New release of IPTV Smarters pro was issued with few minor updates for general bug fixes and updates to the current standards, the newest version was also released to include ADs from the google play store but the version I have listed here is AD free so it is a better version. You can install Version 1.6 or version 2.0 Offical and they would not have Ads on them but version 2.1.2 has got ads from the official google play store so I added a free ad-free version here for users to download

No matter how you look at it, USA and UK users are now been targeted for by their Internet Service providers to track them down and issue letters to them for using IPTV programs that are using UK or USA services, that's why I always recommend getting a VPN for these services.

Best VPN to watch USA and UK is IPVANISH as they don't keep logs and they monitor traffic. If you are one of the unlucky people that cant gets IPVANISH in your country then I recommend the next best thing which is Strong VPN or Express VPN. Don't worry they all come with a money-back guarantee if they don't work so gives you time to try them and then move on to the next one.

Generally speaking, if you are watching LIVE TV for Arabic Television only then you don't need or even require a VPN. However, if you bought non-Arabic for example a USA service and has Arabic TV with it then you do need a VPN and the previous statement applies as the service is not for Arabic only.

Now, it's available on Google Store :

Make sure you have ordered a demo from our website here

Enter your username and password that you have submitted while ordering

Feel Free to report your issue if you have any feedback. Thanks

For PC ( Windows or MAC

Pastbin IPTV How to get Raw link for KODI