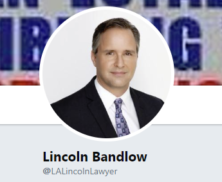 Two years ago, Strike 3 Holdings had never filed a single lawsuit, but today the company has thousands of cases on its record.

In the case of Strike 3, this refers to adult videos which are made available via the Blacked, Tushy, and Vixen websites. The company’s legal campaign has kept the courts busy and contributed to the record-breaking breaking number of piracy lawsuits that were filed last year.

Many of these cases were handled by veteran lawyer Lincoln Bandlow, who’s a partner at the law firm Fox Rothschild LLP.  While the attorney, who’s also a visiting professor at USC, has plenty of experience it turns out that handling dozens of cases at once can be quite a challenge.

Last November, Bandlow was slapped on the wrist for failing to meet the court’s deadlines. The attorney explained that this was due to calendaring issues or incorrectly reading the court’s orders. He apologized and promised to take steps to prevent similar issues going forward.

However, it didn’t take long before more deadlines were missed in two dozen cases at the Eastern District of California. This time the attorney forgot to submit status reports. Again, the court requested clarification, asking Bandlow why he shouldn’t be sanctioned for failing to follow its orders.

In this reply, Bandlow attributed the failures to a variety of reasons including technical issues such as an overactive email spam filter, as well as a lack of personnel over the holidays. The attorney also highlighted his track record by noting that he was never sanctioned in 25 years.

This reply didn’t convince the court. In an order issued last week, US Magistrate Judge Carolyn Delaney wrote that Bandlow’s excuses and explanations are unavailing, especially since he was already reprimanded just weeks earlier.

The technological ‘issues’ are no excuse, the Judge writes, noting that people were already practicing law long before there were computers.

“The practice of law predates the computer. Computer and technological problems do not justify failing to comply with court-ordered deadlines, especially under the specific circumstances of these cases.

“Once Mr. Bandlow became aware of his technological problems, he could have—and indeed should have—manually calendared and tracked all deadlines,” Judge Delaney adds.

In addition, Strike 3’s attorney’s explanation that 19 out of the 24 cases with missed deadlines were the result of inadequate staffing, is both “unacceptable and inexcusable”. Especially since Bandlow explained that his law firm Fox Rothschild LLP employs 900 lawyers.

Taken together, the Magistrate Judge concludes that the attorney’s actions are not mere mistakes, but willful disobedience of the court.

“After he was reprimanded for failing to meet deadlines in related matters, Mr. Bandlow was on notice of problems with his calendaring procedure and he was explicitly warned to make sure that he properly calendared all future deadlines.

So, after 25 years of practicing law Bandlow now has his first sanction.

The good news for the attorney is that the “bad faith” is not the worst of its kind. Also, the court believes that his apology is sincere. Nonetheless, this type of conduct is unacceptable, especially for an attorney with over twenty-five years of experience. As such, a $750 sanction is warranted.

While this amount can easily be recouped via a single settlement against an alleged pirate, it’s not good for one’s reputation. In any case, Law.com quotes the attorney saying that the $750 will be paid “immediately.”

Whether the massive volume of cases has anything to do with it is unclear. It wouldn’t be a surprise. However, Bandlow is not slowing down much in the new year and has already filed more than 100 new cases on behalf of Strike 3 in 2019.

Besides website blocking, which is gradually spreading all over the world, targeting the domain names of pirate sites is considered to be a somewhat effective anti-piracy tool. For years, copyright holders and local enforcement authorities […]

Retired Police Officer and ‘Copyright Troll’ Square Off in Court

Strike 3 Holdings, one of the most active copyright trolls in the United States, has filed cases against thousands of alleged BitTorrent pirates in recent years. While many of the defendants may indeed be guilty, […]