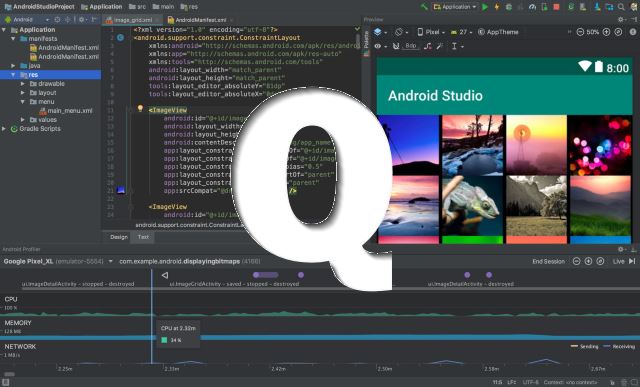 Google has released its latest version of Android Studio, the tool used by developers to create Android apps.

Android Studio 3.4 is now available on the stable channel and as well as hundreds of big fixes, there's also a new version of the Android Emulator complete with support for the Android Q beta. The tool is available for Windows, macOS and Linux.

The new build is not just about bug and stability fixes, however. In terms of new features and options, Google offers up the following list: Resource manager, updates to the Project Structure dialog, automatically importing Gradle libraries, R8 enabled by default and its support for Android library projects.

The Resource Manager is a “new tool to visualize the drawables, colors, and layouts across your app project in a consolidated view” and the release sees Google moving slowly towards Project Marble. The Layout Editor Properties panel has been refreshed, reducing it to a single pane, and there are also now Import Intentions:

As you work with new Jetpack and Firebase libraries, Android Studio 3.4 will recognize common classes in these libraries and suggest, via code intentions, adding the required import statement and library dependency to your Gradle project files. This optimization can be a time saver since it keeps you in the context of your code. Moreover, since Jetpack libraries are modularized, Android Studio can find the exact library or minimum set of libraries required to use a new Jetpack class.

But this is just scratching the surface. Google has created a short introductory video that details what's new in Android Studio 3.4:

You can grab yourself a copy of the latest version of Android Studio 3.4 from the download page. If you already have an older version of the software installed, you can use the Check for Update option instead.

Google has unleashed a huge update for Android smartphone owners. Three months after it debuted its game-streaming service – Google Stadia – on its own Pixel smartphone line-up, the US company is finally expanding to […]

Best iPhone and iPad apps YOU need to download today

If you’ve been left scratching your head – looking for new apps to download to your new iPhone or iPad to take advantage of your shiny new gadget, Apple has got you covered. The Cupertino-based […]