In this post, we take a look at some of the exciting Black Friday Deals of 2019 for Amazon Fire TV and FireStick devices.

We don’t know how long the offers will last. So, if you haven’t grabbed it yet, do it now. 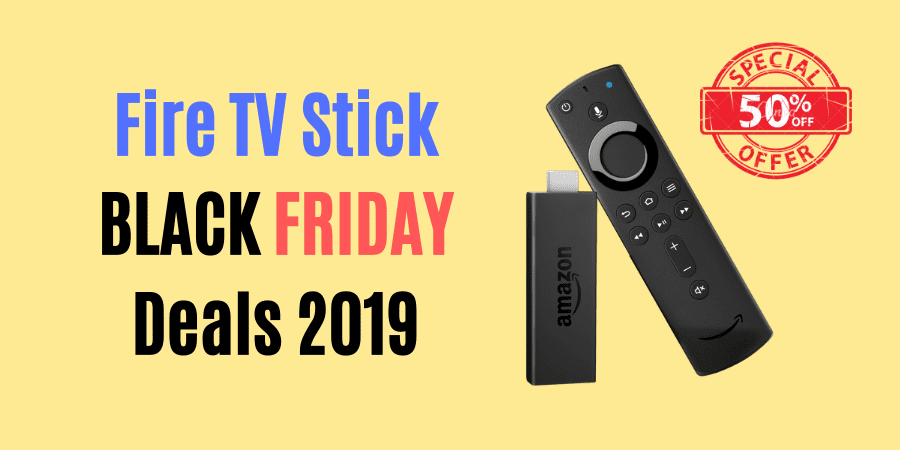 FireStick is one of the most popular streaming devices. Not only do you get access to tons of popular Fire TV Apps and Channels like Netflix, Hulu, Starz, HBO, and more, you can also install loads of third-party apps onto your Fire TV Stick. With FireStick, there are endless streaming options.

Here are the discounts up for grabs:

What is the difference between FireStick 4K and FireStick 2nd Gen?

Functionally, there are barely any differences between the FireStick 4K and the Firestick 2nd Gen (non-4K). However, when it comes to resolution and visual appeal, the difference could be remarkable.

First, FireStick 4K supports Ultra HD (UHD), which is more popularly known as 4K resolution. Additionally, it features HDR10 and Dolby Vision for greater contrast, richer colors, and sharper pictures. On the other hand, FireStck 2nd Gen can only stream in up to Full HD (1080p) quality. It does not offer HDR or Dolby Vision support.

Apparently, FireStick 4K affords a much better viewing experience. However, there is a catch. You must have a 4K compatible TV to exploit the resolution quality the device is capable of. Furthermore, the streaming app must also have 4K videos. Most of the streaming platforms, such as Netflix or Hulu, offer 4K streaming depending upon the subscription plan.

If you do not have a 4K TV, you might just as well buy FireStick 2nd Gen. However, if you do plan to upgrade your TV in the future, it would be a good idea to buy 4K instead, especially when it costs only $5 more during this Black Friday period.

Once you have your FireStick, there is plenty you can do with it. Here are some of them:

Jailbreak FireStick: You can jailbreak your FireStick and gain access to tons of free content including Movies, Shows, Live TV, Sports and more. Jailbreaking is very easy and does not require any special technical knowledge. It is also completely safe.

How to jailbreak a FireStick (Guide with screenshots)

Video guide to Jailbreak a FireStick

Install third-party apps: Your FireStick supports Amazon Store, where you can find lots of apps for your device. However, there are some awesome apps that aren’t available on the Store. Thankfully, FireStick lets you sideload the third-party apps that you can’t find on the Amazon Store. Explore our list of Best Amazon Fire TV Stick Apps for an amazing experience.

Safeguard FireStick with a VPN: For online streaming, we believe that a VPN is a must-have tool. With a VPN, you can stream anonymously without having to worry about surveillance, hackers, and identity thieves. Additionally, a VPN helps you unblock region-restricted content on popular streaming services like Netflix and Hulu. At the time of writing this article, there are several Black Friday VPN deals, but ExpressVPN is my favorite and one of the best VPNs for Firestick. You can follow this guide to install ExpressVPN on Fire Stick.

Here are some other FireStick resources you might find useful:

Here are some of the most frequently asked questions and their answers:

When is the Fire TV Stick Black Friday Deal starting?

What does the Black Friday deal end?

Amazon has not specified any end date for the deals. We are hoping that it will last at least till Friday. However, we are not sure. Therefore, you may want to make the purchase as soon as possible.

Amazon is also starting the Cyber Monday sale, which will last for a week. Though, we can’t say if the deals will be as good as these.

Is Amazon offering more discounts this year than the last?

How to Download and Install ABC App on Firestick / Fire TV [2019] With ABC App, you can watch your favourite programs anytime and anywhere, on your amazon firestick. The app offers Latest News, Topics, […]

Replace your Firestick with Xiaomi Mi Box S 4K Android 8.1 5G WIFI Voice Control KODI This BOX Destories the Firestick ➜ www.husham.com/XiaomiMiBoxS The Best and easiest setup of Android BOX you will ever have. […]

In this article, we will learn how to install Set TV on FireStick and Fire TV devices and cover everything that you need to know about this app to get started. Keep reading! Set TV […]