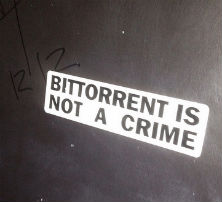 Invented by Bram Cohen nearly two decades ago, BitTorrent has established itself as the premier protocol to share large files among a broad audience and minimal cost.

While BitTorrent is used by many pirates, the technology itself is neutral and does a lot of good as well.

In fact, some of the largest tech companies including Facebook, Amazon, and ___ all embraced it to distribute files within their internal networks.

Still, the pirate stigma is strong. Not without a reason, perhaps, because that remains the primary reason for most people to use it. However, an outright ban on everything torrent related can be a bit much.

A few weeks ago, we were approached by developer “Maurerr,” who maintains a repository of Linux packages for an opensource project. The ‘Entware-backports‘ project includes over two thousand packages that can be installed on MIPSel routers.

One of the packages is the Open Source LibTorrent library, which is widely used by torrent clients including qBittorrent, Deluge, rTorrent, and Tribler. It’s a basic piece of software that can handle torrent downloads, which isn’t infringing in any way.

However, when Maurerr uploaded the “libtorrent.pkg” to a backup mirror at the free hosting service Profreehost.com, his account was swiftly suspended. Apparently, the hosting service’s automatic filters flagged it as “prohibited activity.”

Apparently, the “prohibited” activity was related to the word torrent. The hosting service didn’t provide much more detail, and when we asked why the LibTorrent package wasn’t allowed the answer was short but clear.

“Torrents and torrent related content is strictly prohibited on our service,” a representative informed us.

Profreehost.com offers a free service and has all the right to ban whatever content they please, of course. Perhaps the company has limited staff or negative experiences with torrent related abuse in the past.

However, in this case, the filter appears a bit broad, to say the least.

This isn’t the first time the developer ran into an issue with the hosting service. His free account was previously suspended for hosting a binary installer for a ‘rutorrent-plugin,’ which isn’t infringing either.

When Maurerr explained to the hosting company that this software wasn’t infringing either and that he planned to use it for his open source repository, a representative told him that torrents and warez are not allowed.

Profreehost’s Terms of Service does indeed ban warez, as it should, but we read nothing about a blanket ban on torrent there.

“Sites must not contain Warez, copyright or other illegal material including links or redirects to copyright material hosted on 3rd party websites / resources.”

While the hosting company confirmed that anything torrent related is not allowed, we were able to sneak a TorrentFreak logo onto the service. At the time of writing, that remains online.

Over the years we have closely followed various reports on Internet traffic changes, specifically in relation to BitTorrent. IPV-Sports-728×90 Many of these came from the Canadian broadband management company Sandvine, which often focused on the […]

Use Protection Kodi Kodi Ask a person how to view online video on the internet and they will likely position you to any number of streaming expert services. But these are not the only methods […]