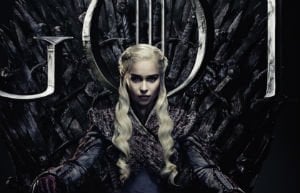 Traditionally, the Game of Thrones season finale is among the most viewed episodes, also on pirate sites.

When the entire series comes to an end, interest is only heightened.

This is what happened indeed. While many people have been rather critical about the story-line of the final season, millions of people ‘tuned’ in, both through authorized and unofficial channels.

The official ratings shot through the roof, with 13.6 million US viewers during the official airing, which is also a new all-time record for an HBO show. On pirate sites, there was plenty of interest as well.

Millions of people pirated a copy. At the height, yesterday afternoon, more than 200,000 people were actively sharing the three most popular torrents, with the most popular one being good for 130,000 sharers alone.

While this is a massive number, it’s nowhere near the all-time record. That dates back to 2015, when over a quarter million people were simultaneously sharing a single file. This drop is in part because the piracy ecosystem has evolved.

Torrent sites used to be the main distribution platforms for pirated TV shows, but unauthorized streaming sites are much more popular today. These sites don’t make any viewing numbers public but are good for millions of ‘pirate’ views as well.

With this in mind, it is likely that the record of the largest BitTorrent swarm in history will never be broken.

The end of Game of Thrones wraps up one of the biggest continuing stories in file-sharing history. The HBO show was as crowned the “most pirated” TV-series for several years, and is likely to scoop up this title again in 2019, to secure its place in history.

Aside from the impressive numbers, Game of Thrones was also at the center of other piracy-related news and discussions, much of which we have discussed in detail here.

One key theme that reappeared year after year were the numerous leaks. The most prominent one dates back to 2015 when the first four episodes leaked from a promotional screener.

In 2017 a Game of Thrones episode leaked with a “Star India” watermark. This eventually led to the arrests of four people. Keeping up with this trend, several episodes came out early this year as well, and even before the final, the plot was already out.

The fact that pirates were often able to see GoT episodes before regular viewers only increased the piracy figures. This was also confirmed by academic research which found that these leaks bred pirates while hurting official viewing numbers.

Other major factors that played a role in the high piracy rates are ‘availability’ and pricing.

During the early seasons, Game of Thrones wasn’t as widely available as it is today. And even if it was, there were often significant release delays, up to several weeks. That drove many people, especially the bigger fans, to pirate sites.

Over the years the availability problem was addressed in many countries, but for many a pricing hurdle remained. Watching Game of Thrones legally, could in many cases cost hundreds of dollars per season, while the pirate alternative was free.

Ironically, even those who had eventually signed up for a legal subscription would sometimes continue to pirate, just out of habit. In Australia,  for example, 20% of the Foxtel subscribers who had already paid for Game of Thrones still chose to pirate the show instead.

In Australia, Game of Thrones piracy has been a hot topic for years. Due to early release delays and relatively high pricing, many chose the piracy route. This frustrated rightsholders and even the U.S. Ambassador, with the latter stating that there is no excuse for ‘stealing.’

Amidst all the controversy, HBO remained fairly calm. Yes, the company issued thousands of takedown notices and even warned some individual file-sharers, but that was about it. Some people did receive settlement demands in 2016, but that was the work of scammers.

Similarly, Jeff Bewkes, in 2013 the CEO of HBO’s parent company Time Warner, noted that piracy resulted in more subscriptions for his company and that receiving the title of “most-pirated” TV-show was actually “better than an Emmy.”

That’s a worthy statement to end with.

In February, a number of important Hollywood studios filed a lawsuit against Omniverse 1 Environment Television. Kodi Underneath the flag of anti-piracy group ACE, the businesses accused Omniverse and its operator Jason DeMeo of supplying of pirate streaming channels to […]

Over the earlier ten years, on the net video clip streaming has develop into the preferred media use resource for quite a few, and far more and more people today are obtaining on board. Travel […]

Last year the Alliance for Creativity and Entertainment (ACE), an anti-piracy partnership forged between Hollywood studios, Netflix, Amazon, and others, sued Florida-based SET Broadcast, LLC. Kodi At the time, the company offered a popular software-based […]