As the controversy over the EU’s Article 13 proposals continue, Twitter appears to be the communications weapon of choice for parties on both sides.

While the debate has often been well thought out and considered, at times it has descended into a chorus of potty-mouthed name-calling that at times has proven embarrassing to read. But that’s the Internet, of course.

As one of the main opponents of Article 13 and in particular its requirement for upload filtering, Julia Reda MEP has been a frequent target for proponents. Accused of being a YouTube/Google shill (despite speaking out loudly against YouTube’s maneuvering), Reda has endured a lot of criticism. As an MEP, she’s probably used to that.

However, a recent response to one of her tweets from music giant IFPI opens up a somewhat ironic can of worms that deserves a closer look.

Since kids will be affected by Article 13, largely due to their obsessiveness with YouTube, Reda recently suggested that they should “lobby” their parents to read up on the legislation. In tandem with pop-ups from YouTube advising users to oppose Article 13, that seemed to irritate some supporters of the proposed law.

As the response from IFPI’s official account shows, Reda’s advice went down like a lead balloon with the music group, a key defender of Article 13. 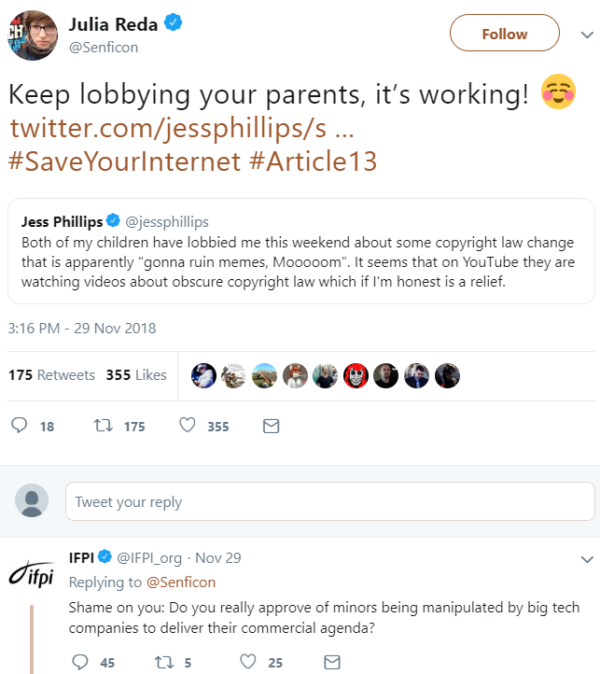 “Shame on you: Do you really approve of minors being manipulated by big tech companies to deliver their commercial agenda?” the IFPI tweet reads.

While Reda reaching out to kids probably irritated whoever was behind the keyboard at IFPI, it can’t have helped that the example given in Reda’s tweet was a response from UK Labour MP Jess Phillips. She’s one of the most plain-talking MPs in the UK currently and has a great sense of humor, even when it comes to her own kids offering education on copyright law.

Joking aside though, it’s pretty ironic that IFPI has called out Reda for informing kids about copyright law to further the aims of “big tech companies”. As we all know, the music and movie industries have been happily doing exactly the same to further their own aims for at least ten years and probably more.

Digging through the TF archives, there are way too many articles detailing how “big media” has directly targeted kids with their message over the last decade. Back in 2009, for example, a former anti-piracy consultant for EMI lectured kids as young as five on anti-piracy issues.

That same year, it was revealed that the Copyright Alliance (of which the RIAA is a member) was pushing a pro-copyright curriculum to schools in the US. Then, in 2012, the French anti-piracy agency HADOPI, which has ties to the entertainment industries, put forward proposals to target children at the Kidexpo exhibition in Paris.

In 2013, both the RIAA and MPAA began teaching copyright classes in California public schools after developing a curriculum targeted at kids from kindergarten through sixth grade.

More recently in 2016, the Creative Content UK initiative, which is backed by the copyright industries, hit classrooms in an effort to educate children about the dangers of piracy.

Then, just this year, a special campaign targeted directly at kids tried to deter them from using ‘pirate’ sites by feeding them questionable information about malware.

With countless numbers of internet sites blocked all all-around the globe on copyright grounds, pirates are continuing to innovate. The increase of apps intended to supply free written content represents a fairly current enhancement but […]

Activity developer and publisher Epic is not providing up on its copyright infringement lawsuits towards cheating minors. The business efficiently asked for default entry versus 1 alleged cheater and responded to the mom of one […]

There can be little doubt that the wide availability of unlicensed streaming portals and IPTV services is causing grave concern among football leagues all over Europe. Kodi The Premier League has been particularly vocal about […]