While the European Union has worked hard to strengthen its copyright laws in recent years, one country in the heart of the continent chooses its own path.

Switzerland is not part of the EU, which means that its policies deviate quite a bit from its neighbors. According to Hollywood, that’s not helping creators.

Responding to recent submission to the United States Trade Representative (USTR), the MPAA has identified several foreign “trade barriers” around the world. In Hollywood’s case, many of these are related to piracy.

One of the countries that’s highlighted, in rather harsh terms, is Switzerland. According to the MPAA, the country’s copyright law is “wholly inadequate” which, among other things, makes it “extremely attractive” to host illegal sites.

One of the concerns is that the Swiss currently have no requirement for Internet services to remove infringing content. In addition, services can’t be held liable for infringements of customers.

The Hollywood group says this should change, adding that it also wants ISPs to aid their piracy battle, and to make sure that “copying” from unauthorized sources is outlawed. The MPAA proposes several changes the Swiss should implement, which include:

1) Ensuring liability under Swiss law for parties who facilitate, encourage, and profit from widespread infringement
2) Engaging ISPs in the fight against online piracy
3) Affirming that current law does not permit copying from unauthorized sources
4) Implementing adequate civil and criminal enforcement tools

While this sounds like a rather pressing matter, these recommendations and the associated problems are far from new. The MPAA’s submission does at times read like a broken record, using the exact same language as four years ago, as seen below. 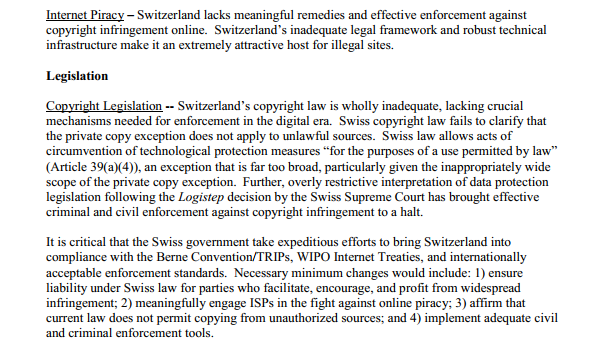 These ‘copied’ sections appear throughout the report, also affecting other countries. For example, Hollywood still wants tougher penalties for Australian camcording pirates, using the same text as in 2014.

This suggests that, in some cases, no progress has been made at all. In Switzerland, however, that’s not the case.

With a new copyright law proposed last year, the Swiss aim to address the critique.

For example, the country addresses the hosting problem by introducing a “take-down-and-stay-down” policy. Internet services will be required to remove infringing content from their platforms and prevent that same content from reappearing. Failure to comply will result in prosecution.

In addition, the controversial Logistep ruling, which prevents companies from harvesting the IP addresses of file-sharers, will also be addressed.

The MPAA is far from impressed though. In a freshly written paragraph, it notes that the new law is still insufficient.

The Hollywood group explains that under the proposed law it will remain legal for people to download or stream pirated content privately, while website blocking remains unavailable.

“For instance, the government dropped any access blocking mechanisms from the draft. Instead of proposing a legal source requirement for private use, the draft cements the understanding that private use of illegal sources is permitted.”

It’s clear that Hollywood is not happy with how things are going in Switzerland, and it hopes that the US Government can help to steer things in the right direction.

Unless that happens, we might see the same text appear again in the years to come. Copied from an authorized source, of course.

A copy of the MPAA’s comments is available here (pdf).

The Web Sheriff, aka John Giacobbi, has been protecting the Internet from pirates for well over a decade. In the early days, he became somewhat of a cult figure thanks to his polite style and […]

The Leading League has verified reaching a sizeable settlement with pirate IPTV supplier Ace Internet hosting. When £100,000 was stated in liquidation paperwork, operators of Ace agreed to fork out £600K in whole. The Leading […]

After many years of targeting people who share larger volumes of content on peer-to-peer file-sharing apps and services, Japan is now taking aim at pirate sites. In basic terms, rightsholders would like to see overseas […]