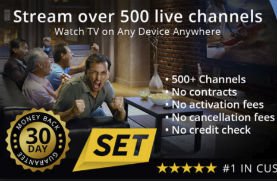 While it was marketed as a legal service, according to ACE members SET TV’s software was little more than a pirate tool, allowing buyers to stream copyright-infringing content.

“Defendants market and sell subscriptions to ‘Setvnow,’ a software application that Defendants urge their customers to use as a tool for the mass infringement of Plaintiffs’ copyrighted motion pictures and television shows,” the complaint read.

Initially, SET TV hired an attorney who informed the court that it had stopped offering its service and subscriptions. At the same time, the copyright infringement allegations were denied. After this initial response, however, things quietened down.

When the copyright holders requested to depose owner SET TV owner Jason Labossiere and its employee Nelson Johnson, who are both listed as defendants, they failed to respond. The same was true for the corporate entity.

Not much later SET TV’s lawyer withdrew from the case, citing unpaid invoices. This lack of progress eventually prompted the copyright holders to file for an entry of default. This was awarded and a few days ago Netflix, Amazon and the Hollywood studios submitted their demands.

According to a filing at a California Federal court, the rightsholders argue that SET TV (Set Broadcast) is guilty of willful copyright infringement. To compensate their losses, they request the maximum statutory damages for a total of 51 works.

“Set Broadcast has willfully infringed Plaintiffs’ Copyrighted Works and, in
doing so, caused Plaintiffs and their entire business model immense damage. The $7,650,000 statutory damages sought here therefore represents only a fraction of the actual damages inflicted by Set Broadcast on Plaintiffs,” the motion reads.

The motion notes that SET TV had 260,000 monthly users, of which a significant percentage accessed copyright-infringing content. The 51 works that are mentioned in the motion are just the tip of the iceberg, the rightsholders note, which further supports the request for substantial damages.

In addition to monetary relief, the companies also request a permanent injunction to prevent any infringements of their works going forward. This is needed, they argue, because it’s possible that the infringing activities will continue at a later date.

“Though the Setvnow service appears to no longer be available, Set Broadcast’s apparent cessation of its willful and flagrant infringement does not and should not prevent this Court from exercising its discretion to permanently enjoin Set Broadcast from infringing Plaintiffs’ Copyrighted Works.

“There is a significant threat of continuing irreparable injuries to Plaintiffs,” they add.

With SET TV no longer defending itself, it is likely that the court will side with the copyright holders. However, the question remains whether they will ever see a piece of the millions that they’re after.

In a similar copyright infringement case,  SET TV previously reached a settlement with Dish last November, agreeing to pay more than $90 million in damages. Considering this, it’s doubtful that there is much money left to take.

With millions of fans around the globe, Spain’s La Liga soccer league is one of the most popular in the game. Travel To allow fans to keep up with all the latest news, La Liga […]

Essential players in the amusement business normally see piracy as an existential menace that endangers their livelihoods. IPV 728×90 (set 3) Even so, piracy can also be framed in a diverse gentle. That is, a […]

Over the past three decades, Guns N’ Roses has been one of the best-known bands in the world. Kodi When it started in the mid-eighties most music was still sold on cassettes, while the World […]