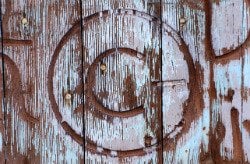 Takedown notices are a particularly useful tool for copyright holders who want to make sure that infringing copies of their work are not widely distributed.

Every single day, rightsholders and their representatives scour the web for references to pirated content, which generally aren’t hard to find.

These links are then reported to various online services, such as Google, with requests for their operators to remove the allegedly infringing content. This system works well in most cases, but it’s far from flawless.

We have documented a wide variety of mistakes in the past, ranging from movie studios who target their own content to outright censorship attempts. Today we can add another unusual example to the list.

The DMCA notice in question was sent to Google on behalf India’s oldest record label, Saregama. At first glance, it appears to be fine, listing dozens of domain names where its work is published without permission. On closer inspection, however, one URL definitely stands out.

The record label requests Google to remove a link to SpicyIP, a widely respected and well-known blog among copyright experts and lawyers, frequently rated as one of the top sources in the field.

The site was founded by professor Shamnad Basheer, a legal scholar from India, who’s helped by a team of ten other copyright specialists. Not a site one would typically associate with hosting pirated songs, as the label suggests in its takedown notice.

And indeed, no pirated content was linked on the site. Still, Google informed SpicyIP that it received a takedown notice, with which it had to comply.

“Google has been notified, according to the terms of the Digital Millennium Copyright Act (DMCA), that some of the material found on your site allegedly infringes upon the copyrights of others,” Google wrote.

SpicyIP author Divij Joshi, who also happens to be a lawyer, notes that the search engine went ahead and removed the page from its index. If the site disagreed with this decision, it could file a counter-notice or reach out to a legal expert, the search engine noted. In this case, that wasn’t a problem.

“Thankfully, we don’t have to look far in these parts to find a lawyer to handle this process, and our counter-notice was successful. Our post was eventually reinstated on January 21,” Joshi writes.

SpicyIP notes that it’s “funny” and “appropriate” that the takedown notice was sent to a copyright law blog. However, it also gives rise to critical notes about these automated takedown systems.

“Had it happened to a non-lawyer, or even someone who had ceased to take interest in their old blog, as it often does, it would result in the permanent removal of public information from an index which serves as the gateway to the internet, due to the ‘mistakes’ of private parties whose interests do not coincide with public access,” Joshi cautions.

The implications for the future of access to knowledge shouldn’t be ignored according to the copyright blog. Especially at a time where “upload filters” become more prevalent. Also in India, where the Government recently proposed a law that imposes automated takedowns requirements, much like Article 13.

Launched in 2013, French-based search engine Qwant markets itself as a privacy-friendly service. IPV 728×90 (set 3) Currently one of the top 50 most-visited sites in France, the service claims not track its users, unlike […]

The Swedish Pirate Bash is calling on Justice Minister Morgan Johansson to set a halt to the wave of threatening piracy letters that have swept the region in the latest months. The get together likens […]

More than seven years have passed since the file-storage empire of Kim Dotcom collapsed, with Megaupload being the prime target. Kodi Since then, the New-Zealand based entrepreneur and several of his colleagues are still waiting […]