While the vast majority of BitTorrent users will simply visit their favorite pirate site for a list of what is available, very often content hasn’t been released online yet. From simply trying to soon to waiting for a delayed release, checking sites can be a bit hit and miss.

For those looking for more information on whether content has hit the Internet yet, it’s possible to use a so-called PRE Database, or PreDb for short. These sites, which can be automatically or manually maintained, contain lists which detail release names, when they became available online, and other relevant information.

While some PreDb sites sometimes contain links to torrents or NZB files, for example, most toe the line from a copyright perspective. They are simple archives of information that cannot be claimed by copyright holders. That, however, doesn’t stop them from trying.

Recently, TorrentFreak had a discussion with the operator of SweTracker, a PreDb/tracer service that focuses on providing information for Nordic releases.

“As a Nordic user I wanted to see where all the Nordic releases are, where to find them, and who had them first,” he explained.

“Swenews.info [another release tracking site] still existed back then, but it didn’t say in plain text which specific tracker had the content, so you had to visit all the possible trackers. So then I decided to create my own version of Swenews but detailing the specific tracker. This was about two years ago.”

While many PreDb-style sites monitor for ‘Scene’ releases using information culled from IRC, SweTracker monitors BitTorrent trackers and publishes information on who won the ‘race’ to put content online first. It does not link to any pirate content whatsoever but anti-piracy companies regularly report the site to Google. 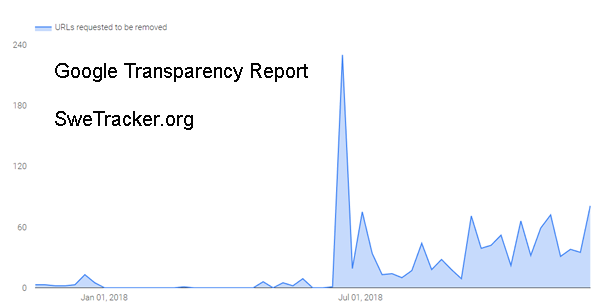 As the image above shows, SweTracker has been reported to Google many hundreds of times this year alone by anti-piracy companies who clearly cannot tell the difference between reporting news and offering pirate releases for download. SweTracker’s operator says he’s become used to the problem.

“My personal experience with [anti-piracy companies] is that they don’t really know how stuff works. They often state that users can download or stream movies directly from SweTracker, but that’s simply not true,” he explains.

“But, I try to make life easy and do remove the releases they ask me to remove.
They have contacted me via email several times.”

As far as we can tell, this level of cooperation really isn’t needed. However, SweTracker’s operator says that he’s had serious problems in the past when loose-cannon companies erroneously targeted his site.

He reveals that one company took its complaints about his site to Cloudflare and then to his own web-host, which responded by taking down his entire site until all of the files on it could be checked for infringement. This effort took almost a day during which the site was rendered completely inaccessible.

The problems facing SweTracker are not unique, however. There are perhaps a dozen similar sites online currently, with PreDb.org, PreDb.pw, and Pre.Corrupt-Net.org being among the most respected and visited.

PreDb.org states clearly on its main page that “There are absolutely NO downloads of copyright-protected works, hyperlinks to downloads, torrent files, magnet links, nzb files or similar content on any part of this web site” but that doesn’t prevent complaints.

Google’s Transparency Report indicates that at the time of writing, PreDb.org has had 2,204 URLs reported by content and anti-piracy companies, with Google removing the links from its indexes approximately 65% of the time.

A similar situation is faced by PreDb.pw, which has had 1,103 of its URLs reported to Google with requests that the company removes them from its search indexes. At the time of writing, Google has cooperated almost 85% of the time.

Quite why these sites are aggressively targeted isn’t clear, but it seems likely that simply having a release name on the site is enough to classify it as a full-on piracy resource. As we’ve pointed out dozens of times in the past, a simple whitelist could provide a very simple solution to this problem.

This 7 days, Matt Hancock, Secretary of Point out for Electronic, Society, Media and Sport, announced the launch of a consultation on new legislative measures to cleanse up the ‘Wild West’ features of the Internet. […]

To ensure that the Internet is able to function to the benefit of the broader public, the Government of Canada appointed an external panel to review Canada’s communications legislative framework. The panel is expected to […]

With computer software growth and related capabilities now available to millions of frequent citizens, purposes are released and up-to-date every single few minutes of every single working day. FireTV Though undoubtedly practical, the huge majority […]