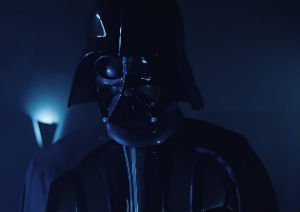 Over the years we’ve written numerous times about questionable copyright claims on YouTube.

This problem is far from new but more and more stories are emerging every week. Over the past days, a claim on a Star Wars fan film has caught a lot of attention.

The video in question was created by the popular Star Wars Theory channel, which published the first episode of the “Vader” fan film just before Christmas.

The channel is operated by Toos, a dedicated Star Wars fan, who made the video for like-minded fans. Aware of the sensitive stance rightsholders have regarding fan films, he reached out to Lucasfilm beforehand.

The company, which was the original copyright holder of the Star Wars franchise before it sold to Disney, said that Toos couldn’t monetize the project, nor could he crowdfund it. However, if he stuck to the rules it could continue. This meant that Toos paid for the production himself and published it without ads.

All seemed fine for the first weeks after the episode was put up. The video was viewed millions of times and received tens of thousands of likes. However, this week things changed.

Without prior notice, Warner/Chappell – which controls the rights to Star Wars’ music – moved in and claimed the video. While the fan film remains online, it’s now showing ads with the revenue going directly to the music publisher.

“They have claimed the whole movie because there is a piece in there that uses the rendition of The Imperial March,” Toos says.

This isn’t the original sound recording that was used in Star Wars, as Toos hired a composer to write a remake of the original theme music. However, according to Warner/Chappell, it’s a cover which they, apparently, want to be paid for.

Responding to the issue in a YouTube video, Toos says he’s disappointed. After being told that he can’t monetize the film, one of the rightsholders has moved in and monetized it instead.

“It’s not about the money, it’s the principle,” Toos says. “Someone from one of those companies went in there and manually claimed it. To me, that’s just very vindictive. It’s very rude.”

Soon after Toos published his response on the “Star Wars Theory” channel, it blew up. People directed much of their anger at Disney and characterized the copyright claim as clearly false.

False in this case is a matter of perspective. While non-commercial fan films are often allowed, the rightsholders can still claim it. Whether this claim is rightful or if it’s a fair use ultimately has to be decided in court.

Toos doesn’t want to take it that far. Following the public outrage, Warner/Chappell reached out to his network to indicate that it wouldn’t back down. This puts him in a tough spot.

Toos can easily dispute the claim. If Warner/Chappell uphold it, he can appeal again after which the music publisher has to file an official DMCA notice. This will then result in a strike on the channel and the video will be removed as well.

At that point, Toos can file a counter-notice. YouTube will then restore the video after ten days unless Warner/Chappel takes the matter to federal court. Not a very pleasant outlook, to say the least.

Warner/Chappel could easily win a potential lawsuit. They argue that the film’s music is based on the original composition of Star Wars themes, which is indeed the case. That the film is non-commercial doesn’t mean any use is fair use, there are other factors that play a role as well.

Toos prefers to let the issue go. He still plans to continue with the second episode, although he won’t use any Star Wars themed music for that.

The good news is that the copyright claim and response brought a lot of attention to the Star Wars Theory channel and the “Vader” fan film. That doesn’t hurt the support he receives through Patreon and other avenues, which comes in handy as Newsweek notes that the film cost around $150,000 to shoot.

As for Warner/Chappell, they will likely continue to claim videos which they believe infringe their rights. This is not the first fan-made project they have gone after and it likely won’t be the last.

Before this 12 months, many key music companies sued Constitution Communications, one particular of the most significant Internet suppliers in the US with 22 million subscribers. Kodi Aided by the RIAA, Capitol Information, Warner Bros, Sony Music, […]

When Amazon is outlined in connection with copyright infringement lawsuits, it&#8217s commonly owing to its involvement in the world anti-piracy coalition, Alliance for Creative imagination and Entertainment. In individuals circumstances, Amazon is generally on the […]