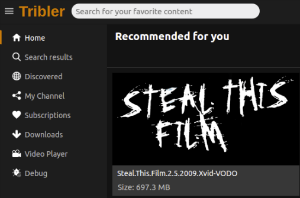 The Tribler client has been around for well over a decade and during that time it’s developed into the only truly decentralized BitTorrent client out there.

Even if all torrent sites were shut down today, Tribler users would still be able to find and add new content.

The well-funded project is managed by dozens of academic researchers, which is a guarantee for continued development. One of the challenges in recent years has been to make torrenting via Tribler anonymous.

The Tribler team addressed this problem by adding a built-in Tor network to the client, routing all data through a series of peers. In essence, Tribler users then become their own Tor network helping each other to hide their IP-addresses through encrypted proxies.

This works reasonably well but has some downsides.  A Tor-like network tends to be slower as files are shared through multiple connections. In addition, it relies on “exit nodes” whose IP-addresses remain visible to the outside world.

Professor Johan Pouwelse, leader and founder of the Tribler project, informs us that his lab at Delft University of Technology has bought 14.4 petabytes of Internet bandwidth. This bandwidth, provided by Leaseweb, will be used to scale-up the Tor-like privacy protection.

To pay for the bandwidth they sold a three-digit number of its Bitcoin stash. The University took an interest in Bitcoin in its early days and started mining years ago, and this money is now used for Tribler’s development.

While it’s certainly interesting to see that Bitcoin mining funded the bandwidth purchase, what Tribler is doing with it is even more important.

Tribler was the first torrent client to treat bandwidth as a currency. It added a blockchain which keeps track of people’s sharing habits and with the latest release users can now “mine” credits. The ultimate goal is to have a stable economy with users trading in bandwidth to ensure fast and anonymous downloads.

To kickstart this economy, Tribler will deploy “token robots” that can manage the bandwidth and operate exit points. This means that it’s easier for individual users to become anonymous.

“We create swarms of intelligent bots to manage bandwidth. These bots do as they are programmed, they can make smart decisions. We believe robots can’t be as easily corrupted as humans or forced to act against their own will,” Pouwelse says.

More than 26 researchers worked on “terminator bots,” as they are called,  and Pouwelse says that they are among the most autonomous and smart software bots out there.

By default, users are not operating as an exit-node in the pseudo-anonymity network. This can be changed in the settings, but people who choose to be an exit-node should be aware of the consequences.

Over the past several years, millions of euros have been spent on Tribler and related research. Professor Pouwelse and his team will continue this work during the coming years. They see themselves as a unique project without commercial interests.

There are others working on similar decentralization goals, combining BitTorrent with the blockchain. However, professor Pouwelse is not a fan of these initiatives.

“We are seeing Bittorrent bundling malware and promoting a spammy ICO offering. It is sad to see rot inside our great community. We are the only non-profit team advancing decentralization from the tested foundation of BitTorrent,” Pouwelse says.

Today the researchers released Triber V7.2 and those who are interested can take it for a spin.

While most Western torrent site users are familiar with giants such as The Pirate Bay and RARBG, there’s also a thriving BitTorrent scene in the Far East. Millions of Internet users in countries like China, […]

An e-mail sent to Brock College in which Bell-owned TSN requested backing for a web-site-blocking regime in Canada is elevating eyebrows. The document notes TSN’s previous guidance for the university, even though linking the proposed […]

In retaliation for mass blocking that targeted Telegram but induced common collateral damage, hackers have hit the website of Russia’s Federal Agency for Global Cooperation. The attackers, who signed off as ‘Anonymous’ , left a […]