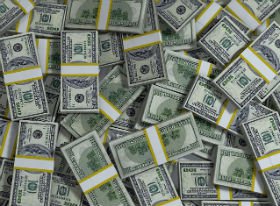 Despite the growing availability of legal options, online piracy remains rampant. Every day pirate sites and services are used by millions of people worldwide.

This is a serious problem for major content producers, Hollywood included. At the same time, it’s also seen a threat to the wider U.S. economy, which generates hundreds of billions of dollars from video entertainment.

How copyright infringement affects the economy in actual numbers is hard to measure, especially since the piracy landscape changes rapidly. That said, the U.S. Chamber of Commerce Global Innovation Policy Center, in partnership with NERA Economic Consulting, attempted an estimate.

In a report titled “Impacts of Digital Piracy on the U.S. Economy” they combine multiple data sources, paired with a broad range of assumptions, to estimate how much revenue video piracy is costing the U.S. economy.

In order to calculate how much piracy costs, the researchers first had to determine the global piracy volume. They did so by combining data from two known piracy tracking firms.

Specifically, the number of pirated movies and TV-shows are estimated using data from the German BitTorrent tracking outfit Tecxipo. These are then extrapolated to estimate the volume of other piracy sources, such as streaming and direct downloads, based on data from the UK outfit MUSO.

In addition, the researchers use academic studies to approximate the displacement rate. This is a crucial variable, as it estimates the percentage of pirated files that can be counted as a lost sale. The report settled on a lower bound of 14%, which means that roughly one in seven pirate downloads or streams are seen as lost revenue.

All this information, paired with location data, the average price per source, and a variety of other variables, ultimately leads the researchers to conclude that in 2017 online video piracy resulted in a revenue loss of at least $29.2 billion.

“The study shows that all of the benefits that streaming brings to our economy have been artificially capped by digital piracy. Using macroeconomic modeling of digital piracy, the study estimates that global online piracy costs the U.S. economy at least $29.2 billion in lost revenue each year,” the report reads.

In raw numbers, the researchers put the number of pirated  U.S.-produced movies at $26.6 billion, while they estimate that roughly 126.7 billion U.S.-produced TV episodes are pirated digitally each year. This piracy takes place mostly from outside the United States.

The impact on the broader economy is even larger. According to the researchers, online video piracy costs the U.S. economy between 230,000 and 560,000 jobs and between $47.5 billion and $115.3 billion in reduced gross domestic product (GDP) each year.

Not all types of piracy are the same of course. A pirated Netflix movie results in lower losses than a Hollywood blockbuster. Similarly, a pirated Bollywood film doesn’t impact the U.S. economy much.

Interestingly, the report notes that piracy by U.S. citizens doesn’t necessarily have to be detrimental to the economy. The money these people ‘save’ by pirating is likely spent locally, which, depending on various factors, could even be beneficial to the economy as a whole.

Or as the researchers put it:

“Consumers spend the income gained from displaced legal consumption on other goods and services, many of which are produced in the U.S. Therefore, the net effect on the U.S. economy of this component of piracy could be either positive or negative, depending on the relative magnitudes of the multipliers for the revenue losses and the revenue gains.”

The most significant impact comes from foreigners who pirate U.S. content, as the money they save is likely not being spent in America.

Overall the report provides a detailed overview of the potential revenue losses. Displacement rates are complex, of course, as there are probably hundreds of other variables that could have been taken into account, but it looks like the researchers did a good job at factoring in the most crucial elements.

Unfortunately, however, there is a glaring error that can’t easily be ignored.

The report specifically set out to provide an up-to-date overview of the new piracy ecosystem, one that includes apps and illicit streaming devices. No surprise, as dedicated streaming boxes are generally seen as the biggest threat to Hollywood.

“These rapid changes necessitate up-to-date estimates of the impact of digital piracy,” the report notes.

The problem, however, is that most app and streaming device piracy isn’t covered by the study. The report relies on category data from MUSO, which only covers regular browser visits to pirate sites.

This typically excludes most apps and pirate set-top boxes. Also, the boom in IPTV piracy isn’t covered by these data either.

TorrentFreak reached out to the researchers, who informed us that they weren’t aware of this. This means that their overall estimate of the impact of video piracy is even more reserved than they initially assumed. Needless to say, that has not been left out intentionally.

Whether it’s complete or not, these types of studies are generally welcomed by rightsholders. As such, the report will likely be mentioned frequently in future lobbying campaigns.

Over the past decade there have been dozens of orders requiring Internet service providers around the world to block access to copyright-infringing content. FireTV The majority of these orders have attempted to protect the movie […]

The Alliance for Creativeness and Enjoyment (ACE), the anti-piracy alliance showcasing several Hollywood studios, Amazon, Netflix and other leisure outfits, has declared war on pirate streaming expert services. Kodi The alliance is the driving drive […]

YTS is the most-frequented torrent website on the Net. With thousands and thousands of every day visitors, it even beats the legendary Pirate Bay. Travel The site ‘unofficially’ took about the YTS model when the […]