WTF! No Fix from KODI Major

Dear Kodi users, by now you are receiving the new Major Update to improve the streaming software. Announced on the Kodi offical website, confirming this new upgrade is all about stability and usability. Targeted to The to Kodi version 18, Also known as Leia. The new release, version 18.5, release features numerous fixes and improvements including multiple iOS platforms, including iPhone 11 and seventh-generation iPad.

Although this update looks set to make our life with Kodi better, however, there is a huge glitch this update will not fix. Earlier this week, Kodi posted a message on Twitter after numerous complaints that some add-ons aren't working.

“Everyone asking why their addons don’t work: TVDB are updating their site. Their site currently has a number of bugs that have broken the TVDB scraper and any add-on that relies on TVDB data. TVDB are working to rectify the problems. We can’t help you w/ any 3rd party add-on.” 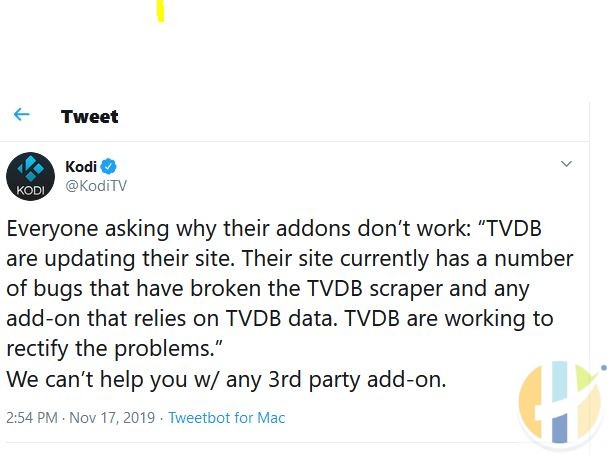 If you didnt know, TVDB.com is a TV Scraper. It's the essentially massive database that contains full meta data for hundreds of popular TV shows and movies in different languages.

Frustrated messages on twitter, it was clear that a number of frustrated Kodi users were hoping the latest update would solve the compatibility issues with TVBD. However, the team behind the endlessly-customisable player software are adamant that any issues with TVDB and Kodi are not the result of changes they've made…and therefore cannot be fixed by their latest update.

Kodi is often quick to make it clear that it has nothing to do with many of the add-ons that are available for the platform and in recent months has actually distanced itself from some. Kodi is totally legal, but it can be adapted, via third-party applications – or as you know them as add-ons – to stream paid-for content without paying.

On one hand the Kodi team says that it has been designed to be extendable, with add-ons available through third party repositories as well as from the official sources. Once the third party capability is enabled, users can install anything they like.

“As the name suggests, these third party addons and repos are neither produced by, supported by nor endorsed by Team Kodi,” a post on its website states.

“So is Kodi legal? As we supply it, the answer is yes. But as the old saying goes, ‘it's not what you have, it's how you use it', and in this case also where you got it from.

“If it has been sourced from elsewhere, or if something has been added or modified since it was obtained, then all guarantees are null and void. We won't tell you what to do, not to do or how to use our software. We guarantee the reference Kodi we supply, anything beyond that is up to you.”

Use Protection Kodi Kodi Now that the Toronto Raptors have made history over the Golden State Warriors, NBA fans are moving on to the next big thing: The 2019 NBA Draft. Live streaming access to […]

Kodi Use Protection Kodi NEWS: TVDB API Crashing Kodi – Details & Fix The popular TVDB Kodi scraper is currently causing Kodi to crash due to some API changes and enhancements. If you are unable […]