Realdebrid has had a great run in allowing people to use torrent fast and streaming contents at amazing speed. The Realdebrid is a paid service that is been used by so many people now with in the KODI, Firestick and Android community.

Realdebrid has had a big following in Twitter, Facebook and much more developers have started making KODI Addons and APKS just to stream with Realdebrid. 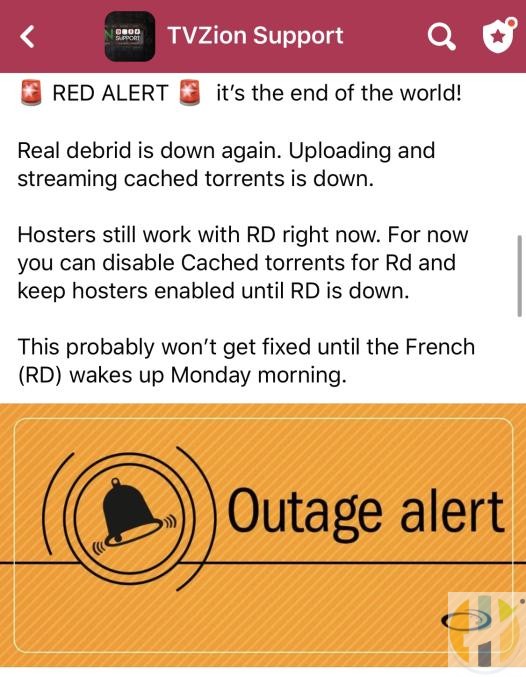 The picture above was posted is been posted by the developers of TV Zion showing that there is a major problem with their ZION service which is a paid service that requires users to have realdebrid in order for it to work.

This is a serious problem and is affecting many other users on the Streaming community that have been dependent on Realdebrid.

Is Corona Virus the cause?

My article was clear. and I warned that Realdebrid servers not going to handle the pressure.

What shall I do now?

It is good to note that Realdebrid has managed to bring back their service for now.

The way I see it since realdebrid now affecting everyone, it's back the old ways of streaming with VPN in order to get good streams and less buffering that your internet provider is blocking you.

Which VPN to use to get my self going again?

Best VPN for streaming chose one listed below

Use Protection Kodi Kodi The Loss of life Streams RD Kodi addon is a Genuine-Debrid consumers aspiration, having edge of the well-liked top quality file host to current tons of fast and substantial high-quality information. […]

Realdebrid Corona Virus Overwhelming Massive Spike in Realdebrid Traffic was recent. Real-Debrid is an unrestricted downloader that allows you to quickly download files hosted on the Internet or instantly stream them into an innovative web […]