Return of the IPTV – IPTV Stratting up again News

Is IPTV Stratting up again? Recently Husham.com reported that IPTV Shutdown news, it was a major IPTV Shutdown wave, The wave did consume the plant and most IPTV users were basically shut down, The IPTV community was facing the biggest problem in the IPTV world. Reported here first in Husham.com that Xtream Codes resent shutting down by the police was consuming ever reseller and users of IPTV Nature. The Panic continues to resume at this time and the matter resumed to be serious

IPTV Shutting down is a piece of news we all knew someday this might come, but DAMN Over 100 Police Officer across Europe took up ARMS and in the biggest campaign in the history of cracking on streaming took place in, and this happened in our Life Time.

And it turns out that all it took was taking out one company named Xtream Codes, that made millions if not billions during the course of the history of IPTV ( Internet Protocol Television ).

What is happening now? 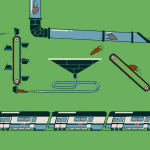 Initial reports that the authorities are going through the Xtream Codes database and tracking down every single user that paid for an Xtream Server for legit or illegal activities and will be brought down for questions.

Accessing the database meant that plenty of users will be on the crackdown list. Initial reports showed a plan in action that involved all of Europe, Africa, USA and plenty of other countries involved with the process.

Initially, this appeared to be taken place. Take a look at these News clipping 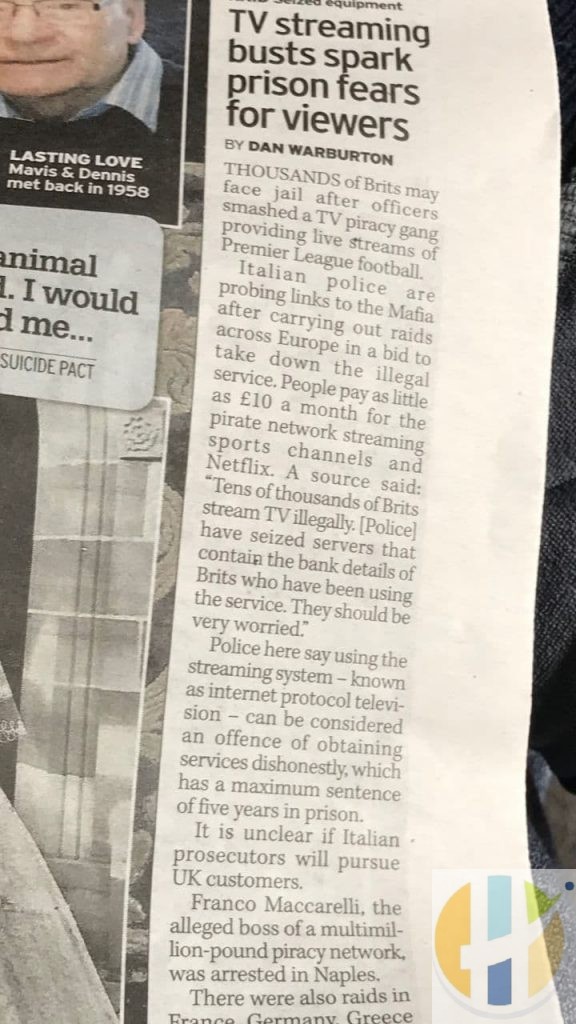 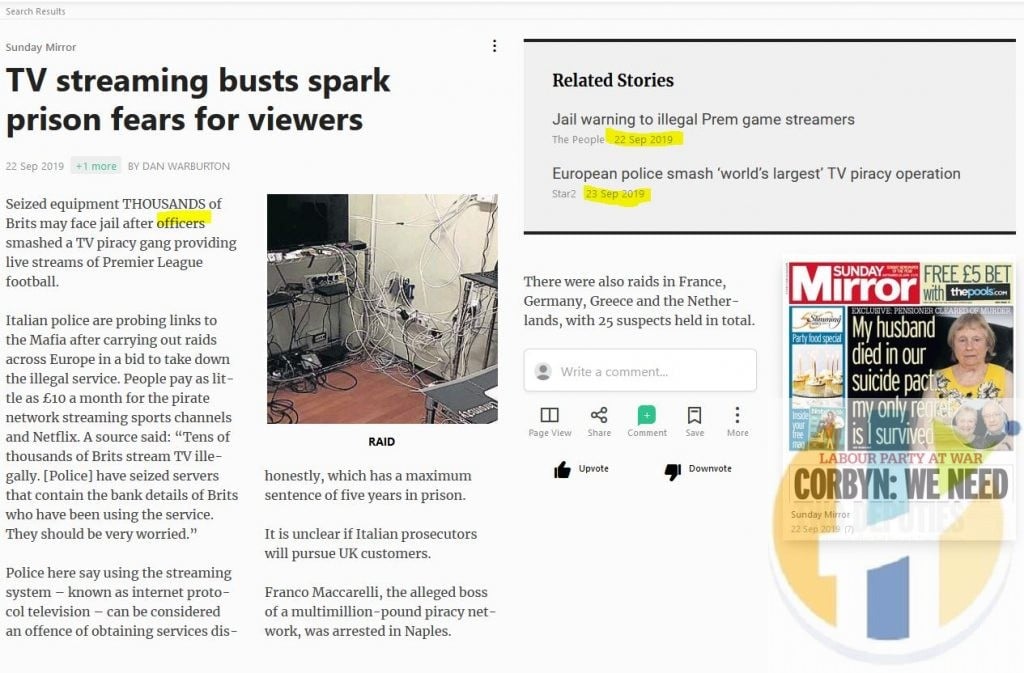 The news was just coming every day that the streaming community will be facing a new direction. The PAYING YOUR TV COMPANY direction.

But the new is not over. As more news came to shine

According to a piece of Insider information, intelligent has a big plan and was going to take over the coming three months. This was a plan to go through the Xtream Codes database and Comb it clean to every reseller. Ambitious plan and very big, Required Courts cases and big corporation to work together to bring evidence. Internet Service providers were meant to help.

However, it all stalled when the lawyers stepped in.

Initial reports from an inside source which Husham.com cant release, Xtream Codes Lawers have managed to get the owner of Xtream Codes released with a fine. This was the first obstacle that this new so-called world pirate task force did face as an issue. This news will hit the public eye as soon as the obstacle number two is ironed out.

Yes the courts, Combing through the database of Xtream Codes prooved very difficult. Not because it was hard, in the matter of fact they read it before they walked in ( Xtream Codes was practically hacker playtime zone, anyone can read that database ). The database was hard to read due to as the Courts put it “Privacy ACT”.

The above was claimed by nameless source and this cant be confirmed from official sources as the case is still ongoing.

To be honest the above sounds more like an episode tv show from CSI.

But it does make sense in somewhat, Europe went out of it way a few years back claiming that Privacy is important, they made all these new laws for everyone around the world to be aware of a new compulsory private act and who can forget GDPR, that by it self made a worldwide change to the entire planet, and it was all about privacy for individuals.

GDPR reshapes the way in which sectors manage data, as well as redefines the roles for key leaders in businesses, from CIOs to CMOs. CIOs must ensure that they have watertight consent management processes in place, whilst CMOs require effective data rights management systems to ensure they don’t lose their most valuable asset – data.

The GDPR is not something that I can forget, it shaped everyone and forced everyone to make changes, it doesn't matter if you are in the EU or not. But GDPR is just to make a point that what our source told us, could very well be more likely to be true.

It is sad to know that this is not changing, most users from Xtream Codes were buying the software and running on a dedicated servers were affected hard by the Xtream Codes Shutdown, Many Hosting Providers started to take down servers one by one, this was to cover their back, and just in case the world police if any would come after that hosting company and tell them to shut down.

So hosting companies started asking questions from anyone that might be running Xtream Codes servers and started closing down.

Some unconfirmed rumours say that the hosting company for KODI website panicked and also took down the KODI website for a short period.

Inside IPTV resellers told me the above.

“All servers have already recived the message and they started to cut ties with the IPTV selllers, and also no refund on any of the money they paid already. So means IPTV Resellers are losing money and their service is closing”

Luckily not all were affected by this, as some IPTV Companies operated their streams without Xtream Codes software and their hosting allow them to continue.

Husham.com has been contacted by several IPTV companies and have been asked to keep a led on their names. To be honest I think telling you which company or not is not going to help at this stage. If and when your provider has shutdown or planning to return and meantime closed down their service or whatever the case may be. Always follow the below guideline 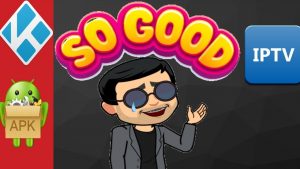 The IPTV Community has been a strong one, very little chargebacks on their payments and very little or almost no fighting or facebook attacks took place. The most corporative of community our of all the streaming communities that I word to report on since the last 18 years that I have been reporting on this information.

This came as a shock to the authorities as it didn't help their case and no man companies got attacked cross countries. In a matter of fact, there was over 60 % of IPTV Companies still communicating to their subscribers that the service will return. Latest news is that ACE TV is also coming back.

Oct 2nd Ace TV original users……….they have started the move of the accounts over to a new panel and servers. This can take anywhere from 24 to 60 hrs for the initial move before any testing. We know that the service will be or is already down. So no need to post about the channels not working. When we are notified of anything, we will post updates here and on the Facebook group. 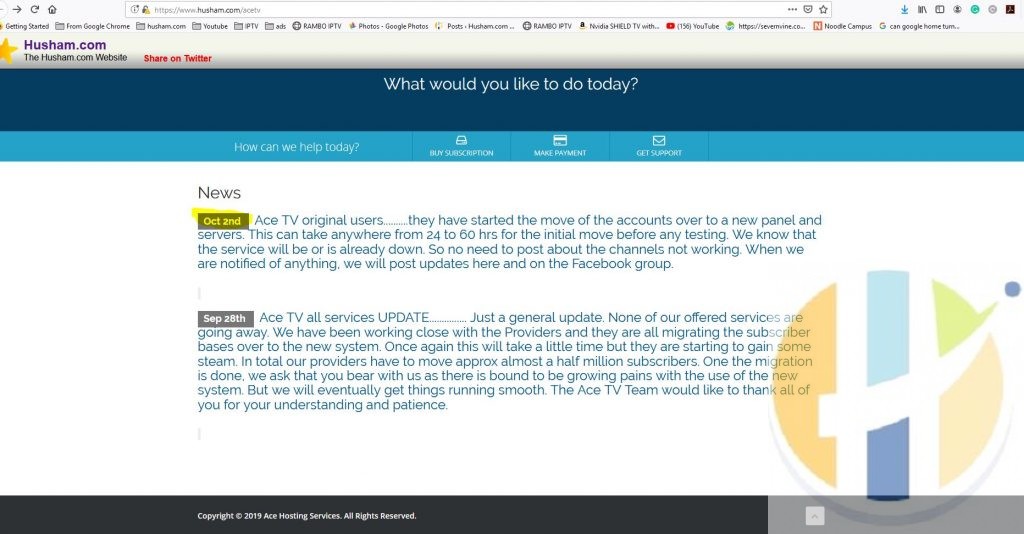 Services such as Area 51 and similar ones are also coming back to the scene. All these services are brought back their services online over the coming weeks.

Your IPTV Provider is back What should you do?

Ok, now you are calm, first you to go back to your IPTV Provider and ask the simple question.

Do I need a VPN to watch IPTV with you? if the answer is yes then you would know your provider is aware of this situation and know how screwed the whole world is right now, and they are advising you to protect your self from now on.

This is no joking matter. If your provider answers the above question yes, then you need one of these VPNs and run them all the time.

IPTV Shutdown or IPTV UPTOWN? After the last reported IPTV Shutdown news that I reported back last year September 2019. Seemed to have slowed down the merging of new IPTV companies and resulted in 50 […]

IPTV Shutdown continues and some still live in Dreamworld Bubble IPTV Shutdown was shocking news when many reported this to be a big thing and many still prefer to believe this is the only HOAX. […]