News Ticker
Contents hide
1 Terrarium TV APK Shutdown get the latest – Terrarium APK Alternatives
1.1 Kodi
1.2 Why did the Shut down Occur?
1.3 Alternatives
1.4 Which one are you likely to recommend/use now?
1.4.1 User Review

Terrarium APK users are upset today after message from developer that the APK is about to shutdown and with no further updates.

Terrarium TV is an app that lets you enjoy the best TV series directly on your Android. Not only can you stream episodes directly from the app, but you can also download them to your device's memory and watch them later without an Internet connection.

The app's interface is elegant and intuitive. In the main window, you can see the most popular series right now, or you can easily filter them by genre. You can also use the search feature to quickly find a particular series. 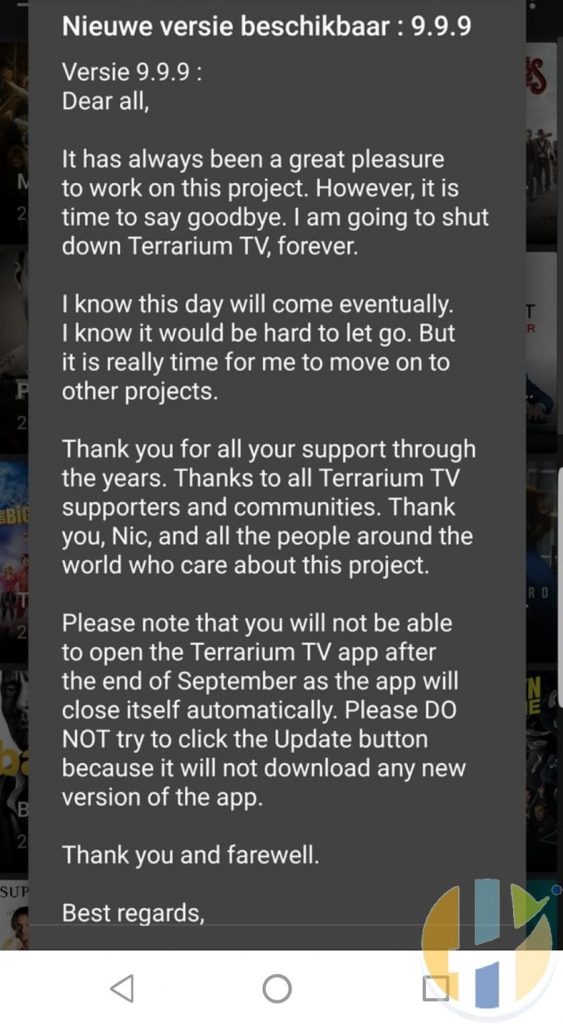 Mixed Feelings around the web has caused users to be confused as to how they should proceed.

Terrarium Users are mostly X KODI Users, plus the new users that like the idea of APK instead of installing KODI.

After KODI Media player made a strict use of Android 5.5 and above. it eliminated all ANDROID or KODI BOX users that use Android 4.4 and below.

All Android 4 BOX's that was not able to upgrade was left high and dry.

Terrarium TV provided a safe haven for these users as they know they dont need to buy a new Android BOX or KODI BOX any more, because now you can use a cheap android 4 box to use APK to watch TV shows and Movies.

Messages from around the World Wide Web has been all for developers and users to calm users down about the new Vacuam caused by the lose of this APK.

(1) Yes we know – Terrarium is gone for some and soon to be gone for all – I am adding some apk's to the wizard that do similar things shortly so feel free to try them out. Terrarium was my favorite but the others work fine. There will be a popcorn time in there too so just remember if you choose to use that don't select any torrent options without a VPN turned on.

(2) I'll be releasing a new build sometime in the near future. No ETA as of yet but sometime soon. Titanium will continue as well but I will not be updating it alone anymore. My focus will be the new build once released. The reason for this is the constant volatility in Kodi and I will only give you guys something that I use myself. So stay tuned on that

(3) There will be a new live service coming soon exclusive to Supreme for now that I worked out a deal for… I'll announce once it's released and you guys can hit up one of the 3 authorized live services folks in here for details once it's out.

Mareo McClurewe have some of the best addons and builds in kodi. Plus we have a great live tv service for only 5 a month

Mareo McClure and if you dont want to use kodi there is teatv.net/ and HD flix net app www.mediafire.com/…/7y3cg2…/HD+Flix+102-noads.apk

Why did the Shut down Occur?

The news of the Shutdown came at a surprise, and even after the message saying that the developer is stepping down. Rumours are still circulating as to the reason for the Shutdown.

The Message from the Creator ‘AKA NitroXenon' was clear

“It has always been a great pleasure to work on this project. However, it is time to say goodbye. I am going to shut down Terrarium TV, forever,” he wrote.

“I know this day will come eventually. I know it would be hard to let go. But it is really time for me to move on to other projects.”

The big question, of course, is why NitroXenon decided to close Terrarium TV down but again, the decision didn’t really come as a surprise. From pushing regular updates to the app as it grew (the last was around May), in recent months its developer has been mostly absent, with users requesting information but very little coming back.

Often the case when services shut down all of a sudden, speculation developer has some legal pressure. While that’s a distinct possibility (the MPA and its associates have reached into the Asia-Pacific region before to threaten developers of similar apps) this is unclear at the moment if this is what had happened.

Equally, the rumour that NitroXenon was paid off by the studios to shut down the application is almost certainly untrue. If (and it is an if) NitroXenon was targeted, it is definitely not the style of the MPA (or the Alliance For Creativity and Entertainment) to offer cash for favour. If anything, they’re the ones demanding the money

As can be seen from the image of the notification below, NitroXenon indicates that Terrarium TV will work until the end of September. However, in most (if not all) cases the app appears to be dead already. Users cannot get beyond the ‘UPDATE’ button.

While some Terrarium TV users are sarcastically describing this September 11 as the “worst in history,” it’s likely that other applications will take up the slack.

Terrarium just went down. Here are some alternatives.

With Terrarium TV officially been shut down, the servers are gone now. Some great alternatives listed below

Which one are you likely to recommend/use now?

If you have a favourite from the list above or give us feedback on what if there is another that is not mentioned below.

Cinema HD APK 2.1.5 Movies TV Shows Working 2019 Cinema APK is one of the Best APK for movies and TV Shows, The APK had issued another update to upgrade the version to Cinema v2.1.5 […]